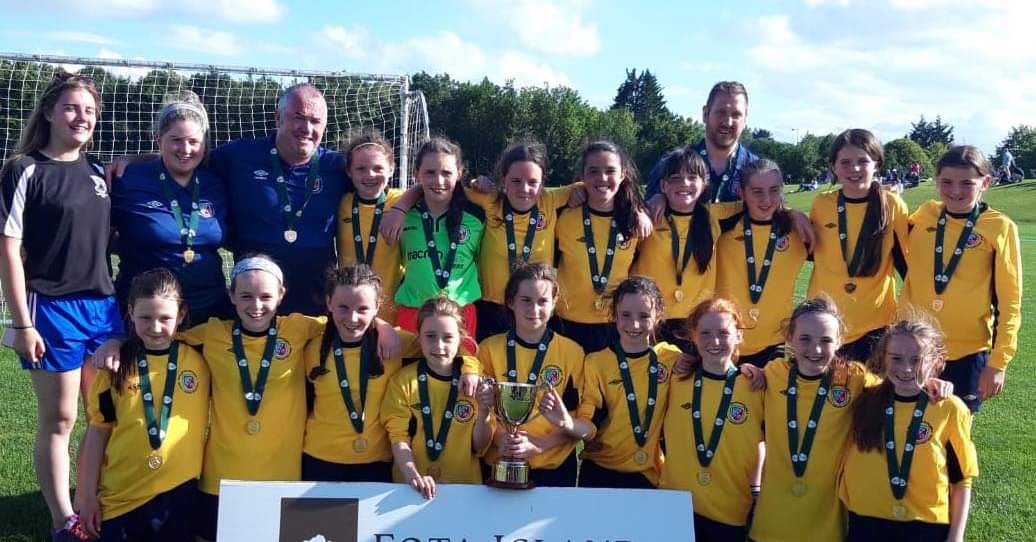 Both Mayo Gaynor Cup squads made the huge 530 km round trip to the Inishowen peninsula on Saturday for their latest Group matches. The U13s were up first kicking off at 2pm against hosts Inishowen.

The young Mayo side immediately got into their stride and Amy Murphy had the first chance in the 2nd minute just wide. Murphy then worked a one-two with Roisha Burke before working the home keeper. Ursula Shaugnessy was the next Mayo player to be denied by the impressive home custodian and a piledriver from Murphy just cleared the crossbar.

Mayo went ahead on 8 minutes when a clever reverse pass from Sarah-Jane Kilgawley found Cliodhna Dowling in the box. An excellent first touch to move the ball to one side was followed by an outstanding strike into the corner of the net. Mayo doubled their lead 5 minutes later. Murphy worked the opening and Alana Kelly found the net with a brilliant strike. Murphy and Burke provided excellent corners from both flanks and only last ditch defending prevented further goals from this source although this witness thought that one such charge down in the box was with hands but nothing was given.

A terrific piece of combination play involving Kilgawley and Kelly saw Murphy hammer another shot just over. Player of the game the home ‘keeper then denied Shaughnessy before the ever dependable Sadhbh O Donnell at right-back had to go off injured to be replaced by Melissa Clarke. A fiercely driven Shaugnessy effort was somehow parried by the ‘keeper with Dowling’s follow-up just wide.

On the stroke of half-time another exquisite Murphy forward pass was dummied by Shaughnessy and Kelly seized onto the ball to rifle home again. Such was the dominance of Mayo in the opening half their goalkeeper Brooke Grimes did not touch the ball a single time.

Management used the opportunity to get game time into the entire squad in the 2nd half and the game got a bit dis-jointed for the early part of the half. The girls soon settled down though and were most unfortunate not to add to their tally with Aoibhin Mc Garry hitting the post and Kasey Ruane hitting the bar. The girls saw the game out at 3-0, kept their clean sheet intact and have now garnered four points from two tough away games.

The U15s kicked off at 4pm by which time heavy rain had moved in across the fantastic playing surface that is Maginn Park. Much like their younger peers earlier the Mayo girls again very much took the game to their hosts Inishowen. Ashleagh Salmon had the first chance on 8 minutes seeing her crisp shot just miss the far post. Beth Roache saw her effort go the same way before a fantastic penetrating pass from Kayla Doherty released the fleet-footed Salmon and she finished emphatically into the bottom left corner. She was unlucky with another chance shortly after before the impressive Emma Duffy was denied first by the post and then by the crossbar with the keeper beaten all ends up both times.
Into the 2nd half and on 43 minutes the home team drew level with a goal on the counter-attack from their pacy forward Bria Mc Gilloway. Facing a buoyant home side with their tails up and in deteriorating weather conditions, this was a huge test for Mayo girls but in Kayla Doherty they have a player who can muster up a goal out of nothing. This she did with a bit of trickery and feigning in the box to put the visitors back ahead. A barnstorming dribble from Doherty saw her denied by the keeper.

With 10 minutes remaining Saoirse Byrne capped a good afternoon’s work by being in the right place to score Mayo’s 3rd. All connected with Mayo wish the home centre-forward best wishes as she sustained a worrying looking injury with, literally, the last kick of the game as Mayo eked out a 3-1 victory